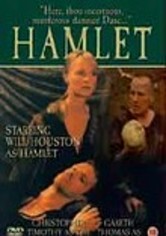 2003 NR 1h 55m DVD
William Houston plays the lead role of Hamlet in this 2003 production of William Shakespeare's timeless tragedy, the story of a Danish prince haunted by his father's ghost -- and by the pain of his mother's treachery. The film's supporting cast includes Gareth Thomas as Claudius, Jilly Bond as Gertrude, Lucy Cockram as Ophelia and David Powell-Davies in the role of Polonius.