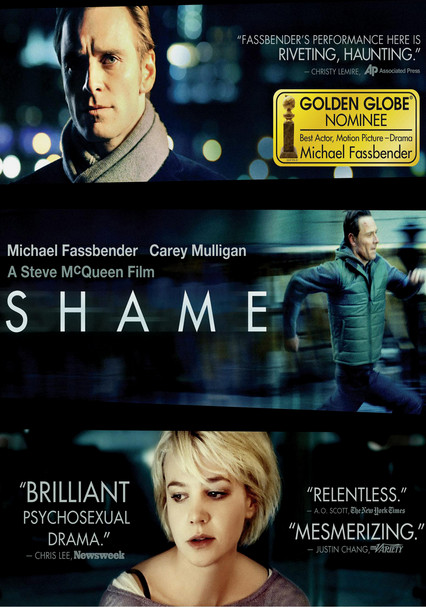 2011 NC-17 1h 40m Blu-ray / DVD
New Yorker Brandon seethes with an overwhelming sex addiction, and when his uninhibited, unstable younger sister, Sissy, invades his life and takes up residence in his apartment, he struggles to get a handle on his behavior.

Parents need to know that the NC-17-rated Shame is all about sex addiction, and the movie is filled with nudity, destructive sexual behavior, strong simulated sex scenes, and innuendo. Some of the sex scenes play out a big roughly; there's also violence in the form of a bar fight (not entirely shown) and a bloody suicide attempt. Expect pretty frequent swearing (including "f--k" and "s--t"), plenty of drinking, and one scene in which the main character snorts cocaine.

A character attempts suicide and is seen covered in blood. The main character gets into a fistfight in a bar after trying to pick up someone else's girlfriend. The fight itself isn't really shown, but the character's face is bloodied afterward.

The movie is mainly about sexual addiction and stays intently focused on that particular world. Although the main character begins to realize that he has a problem and takes baby steps toward solving it, the ending remains ambiguous.

Characters are seen drinking Red Bull more than once. A container of Trader Joe's orange juice is visible.