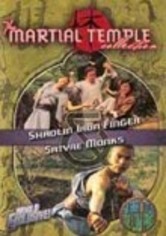 2004 NR 2h 50m DVD
This martial arts double feature kicks off with Carter Wong and James Tien squaring off in Shaolin Iron Finger, then stars Tien as a Shaolin monk battling Wu Tang warriors in Satyre Monks. An Iron Finger master takes on a group of notorious warlords to rescue his mother from the clutches of his enemy. Then, a member of the Shaolin Temple faces off against unscrupulous Wu Tang fighters in a struggle for domination in ancient China.