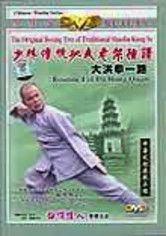 2005 NR 0h 40m DVD
Passed on by Buddhist monks who practiced Wushu in the Shaolin Temple during the late Quin Dynasty, Da Hong Quan is an advanced form of Shaolin freehand fighting. This instructional video unlocks and illustrates its complexities. Through step-by-demonstrations at both slow and high speeds, the presentation reveals the postures, footwork and split-second timing that are at the core of this ancient and highly effective martial art.