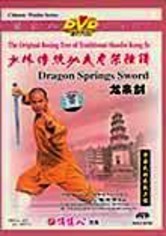 2005 NR 1h 1m DVD
With this installment of the popular Shaolin Kung Fu tutorial series, celebrated Shaolin wushu master Shi Deyang instructs students on the vaunted sword-fighting technique known as the Dragon Springs Sword. Sections include a primer on the history of the technique, a demonstration of the routine in its entirety, a slow-motion, step-by-step tutorial and an introduction to several other Shaolin wushu fighting styles.