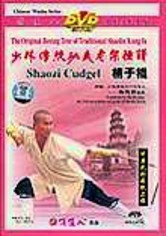 2005 NR 0h 55m DVD
Shaozi Cudgel is very easy to take. It can be used to carry packages and used as hook. The Shaozi Cudgel is more powerful than cudgel. Added a Shaozi in the front of the cudgel, it can exert its force fully. Because it is quite short and small, it is agile and has strong force, thus usually makes the opponent impossible to defend effectively. Its techniques mainly contain: twist, cut, sweep, point, smash, stir, thrust and so on.