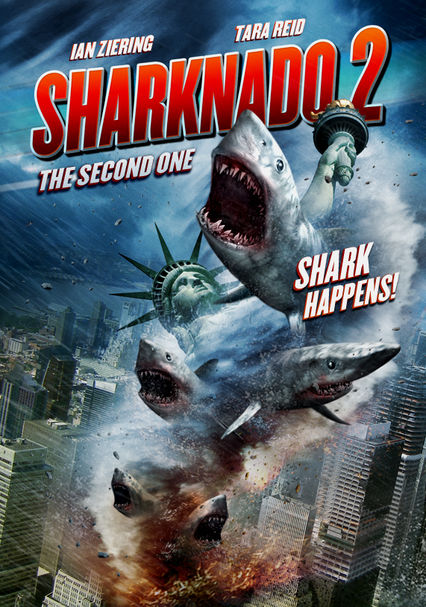 2014 TV-14 1h 35m Blu-ray / DVD
A freak weather system turns its deadly fury on New York City, unleashing a Sharknado on the population and its most cherished, iconic sites - and only Fin and April can save the Big Apple.

Parents need to know that Sharknado 2: The Second One is an intentionally goofy sci-fi movie about a storm that makes killer sharks fall from the sky. It's funny, and older teens likely will find it hilarious; parents will enjoy watching along for the mock-serious lines and cameos from '80s- and '90s-era celebrities. Younger or very sensitive children, however, will be terrified and possibly traumatized by the frequent shark attacks that push the limits on prime-time gore. Characters are suddenly and unexpectedly maimed and killed; limbs are bitten off and bloody bone thrust into the camera; a shark jumps out of the water and bites a woman's face terribly; and we see mutilated flesh with lots of blood. Children who are unable to distinguish between reality and fiction and between CGI and live-action film scenes may be particularly frightened of sharks who can seemingly get them wherever they may be, even places nowhere near the water.

Violence and gore are high and may terrify younger kids. A woman is decapitated; another has her arm bitten off, which is surgically replaced by a dangerous machine. Sharks attack victims in unlikely places. Many (clearly CGI) sharks are killed in various bloody ways including bludgeoning and death by chainsaw. A woman is bitten on the head and face, we see her horribly mutilated skin, with blood.

There are acts of heroism in all the silliness, such as when a man goes to incredible lengths to return a ring with sentimental value.

There are constant, knowing cameos: anchors from famous morning shows, gossip writers, characters from other movies.