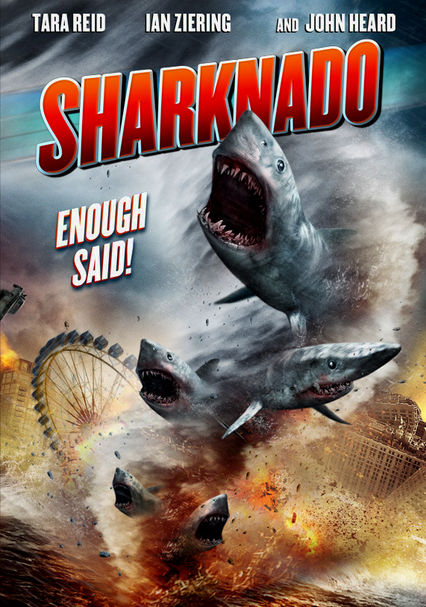 2013 TV-14 1h 27m DVD
When a freak hurricane swamps Los Angeles, thousands of sharks are swept up in tornadoes and deposited all over the city, where they terrorize the shocked residents. Among them is bar owner Fin, who must rescue his estranged wife and daughter.

Parents need to know that Sharknado is a 2013 made-for-TV movie that is so bad, it's brilliant. The gore and the blood -- sharks eating people whole or biting off their limbs -- make this one to avoid for younger kids, but for older teens and parents looking for something campy and mindless, you could do much worse. The dialogue, the "special effects," and the very premise of the story itself are -- intentional or not -- so ludicrous, it needs to be seen to be believed. Aside from this, there is some drinking throughout -- the main character is the owner of a beachside bar -- and a tasteless and gratuitous joke made by one of the characters about how the first floor of a house flooded with bloody water looks like "that time of the month."

A drunk man at a bar makes frequent sexual advances toward the cocktail server.

"Hell." After sharks attack the first floor of a house, kill one of the characters, and leave the house a mess of bloody flooded water, a character says that it looks "like it's that time of the month down there."

Perhaps an argument could be made that these characters show through talk and discussion the importance of being prepared for every kind of emergency, but the utter ridiculousness of the story line makes this argument both difficult and absurd.

Banners advertising J.C. Penney are prominently displayed on a half-pipe being ridden by skateboarders.

The main character, Fin, owns a bar, where characters are shown drinking and behaving in an intoxicated manner.