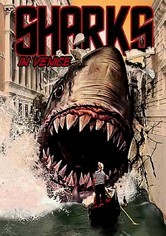 2008 R 1h 28m DVD
While in Venice to investigate the disappearance of his father, diver and archaeologist David (Stephen Baldwin) stumbles upon a lost Medici treasure. But when the mob learns of David's discovery, they kidnap his girlfriend and demand that he recover the fortune. There's only one small, flesh-eating problem: A killer shark has found its way into the city's canal system, and David could be its dinner if he's not careful.