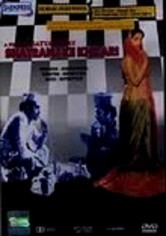 2003 NR 1h 56m DVD
As one of the last sovereign leaders of a remote wealthy kingdom in India, Wazed Ali Shah must protect his people from the British Gen. Outram and his devious plans for complete annexation. Unfortunately, Ali Shah ignores the threat and isolates himself from his people as he writes poems and listens to music, leaving the foolish nobles Mir and Mirza -- whose obsession with chess overshadows all else -- in charge of the doomed kingdom.