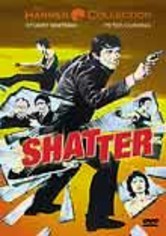 1974 R 1h 29m DVD
An assassin named Shatter (Stuart Whitman) is marked for death when he tries to collect payment for a hit he made on an African dictator. On the lam in Hong Kong, Shatter is aided by a kung fu master (Lung Ti) as he tries to destroy the international drug cartel that's trying to kill him. Peter Cushing and Anton Diffring co-star in this rare co-production between England's Hammer Studios and Hong Kong's Shaw Brothers.