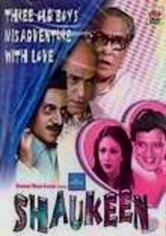 1981 NR 2h 13m DVD
Choudhury (Ashok Kumar), Jagdish (Utpal Dutt) and Inder Sen (A.K. Hangal) may be in their 60s, but that doesn't mean they have to act like it: When Choudhury's wife goes on a pilgrimage, the codgers decide to make a pilgrimage of their own -- for ladies! But when their driver sets them up in a bungalow near his girlfriend's house, little does the chauffeur guess that each of the old lechers will make a move on his gal -- with hilarious results.