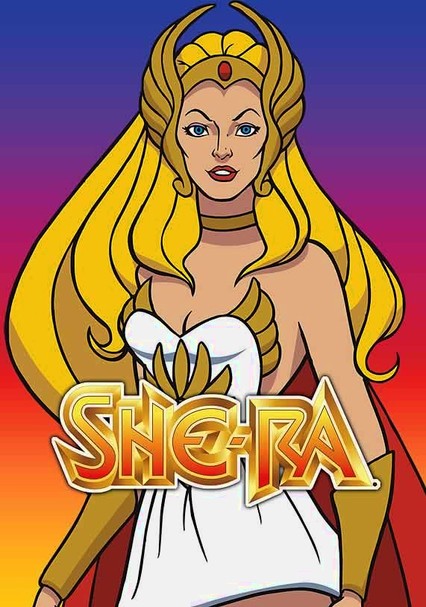 1985 TV-Y7 2 seasons
Under the guise of her superpowered alter ego She-Ra, Princess Adora -- He-Man's twin sister -- fights in the Great Rebellion to defend the Crystal Castle and save planet Etheria from the clutches of dark sorcerer Hordak and his evil minions. Adora entrusts her secret identity to only three close confidantes: sage advisor Light Hope, absentminded witch Madame Razz and less-than-courageous companion Kowl.

Spawned from the hugely popular "He-Man and the Masters of the Universe" cartoon series, "She-Ra" follows the adventures of He-Man's twin sister, Princess Adora, and her alter ego, the superpower-endowed She-Ra. Determined to bring peace to the kingdom of Etheria, She-Ra leads members of the Great Rebellion in their fight to defeat the Evil Horde and its villainous leader, Hordak, in this vividly animated action fantasy.

As her alter ego, She-Ra, the beautiful Princess Adora possesses the power to save the universe, but with Skeletor conspiring in the distance, her work is never done. In this second set of episodes from the show's first season, a dangerous swamp creature known as the Melog threatens to strip She-Ra of her magical strength, and the winged unicorn Swift Wind is kidnapped for exhibition at the Horde World zoo.

Parents need to know that She-Ra is one of the rare animated kids' action series with a female at the center of the story. As such, it will thrill parents hoping to show kids that girls can do anything. Those parents will also notice that many of the female characters on She-Ra are the wisest and most powerful, while males are often minor characters or villains. Each episode centers on a positive social lesson such as the benefits of generosity. Like the cartoon from which She-Ra spun off, He-Man and the Masters of the Universe, the entire show was created to drive sales of Mattel action figures, a consumer link that may concern some. Unlike He-Man, the violence is toned down here and the overall level of tension is ratcheted down.

Very mild mentions of romance and marriage may occasionally occur; She-Ra's costume is rather skimpy.

There is conflict and battle in each episode, but She-Ra often attempts to use reason instead of physical violence, and uses methods like trapping instead of hand-to-hand combat.

The bad guys on the show occasionally call each other names: "You bumbling boob!" The show's heroes are unfailingly courteous and kind to each other.

Positive messages like "it is better to give than receive" are the center of storylines, and are underlined by recaps at the end of each episode.

During its heyday two decades ago, the show was tied to an extensive merchandising line of clothing, games, toys, and accessories by Mattel, though there's little fear (or hope) of finding them on store shelves today.