She-Wolves of the Wasteland 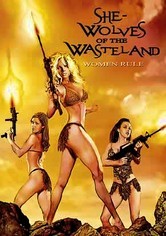 She-Wolves of the Wasteland

1987 NR 1h 25m DVD
In a post-apocalyptic society where men have been eradicated, barely clad hotties battle for supremacy in junkyards and gravel pits. It is here where two tribes battle for control of one pregnant woman, and in turn, the fate of the human race. Kathleen Kinmount and Persis Khambatta co-star as the good and evil warriors in this 1987 sexploitation celebration, which also features Peggy Sands, Sheila Howard, Nina Jaffe, Courtney Caldwell and Linda Santo.