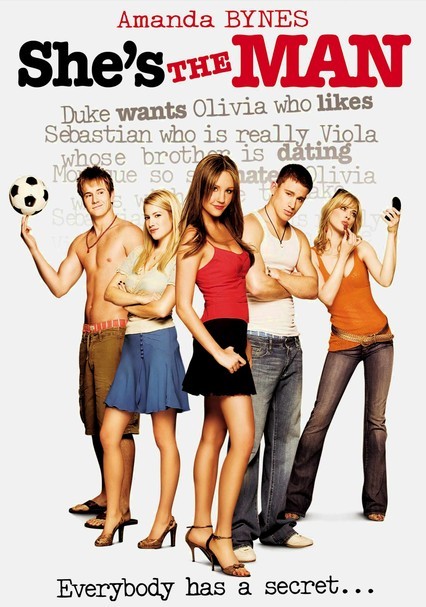 2006 PG-13 1h 45m DVD
Adding a splash of adolescent angst to Shakespeare's "Twelfth Night," this charming romantic comedy follows the efforts of the teenage Viola to convince the students at her twin brother's boarding school that she's actually, well, her brother.

Parents need to know that as Viola pretends to be a boy, some situations arise where her male roommate's evolving affection for her borders on homoerotic. There are some sexual references (references to genitals) and mild language. There is some crass humor (one involves tampons) and some borderline jokes (divorced mom considers dating daughter's boyfriend).

Kissing; Viola sneaks showers (no body parts shown); discussions of sexual orientation and activities (not explicit); references to male genitals (in one scene, to prove he's a boy, Sebastian drops his pants on the soccer field and Viola proves she's a girl by lifting her shirt).

Some slapstick and pratfalls; three girls fight in a bathroom, punching and slamming each other against walls (played as comedy); a soccer ball hits Viola's crotch when she's in drag, and she must pretend it hurts like it would for a a boy.

Protagonist lies to get what she wants.