Sherlock Holmes and the Spider Woman 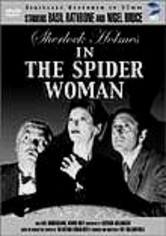 Sherlock Holmes and the Spider Woman

1944 NR 1h 3m DVD
When several wealthy gamblers are found dead in their beds with no visible sign of forced entry or foul play, it's a case made for the Baker Street sleuth. Sherlock Holmes (Basil Rathbone) and ever-trusty assistant Dr. Watson (Nigel Bruce) investigate these "pajama suicides," and when Holmes meets the alluring but cryptic Adria (Gale Sondergaard), he suspects this so-called "Spider Woman" of being the mastermind behind the murders.