Shinedown: Live from the Inside 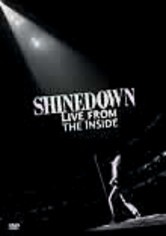 Shinedown: Live from the Inside

2004 NR 1h 0m DVD
Alternative rockers Shinedown perform live at the House of Blues in Myrtle Beach, S.C., in this concert film. The band from Jacksonville, Fla., rocks the house with a classic set that includes "Fly from the Inside," "Lost in the Crowd," "Stranger Inside," "Burning Bright" and many other songs. Extras and special features include a sneak peek behind the band, a documentary, commentary by band members, photos, videos and more.