Shinobi 4: A Way Out 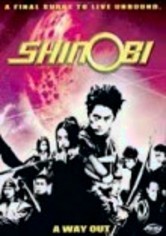 Shinobi 4: A Way Out

2004 NR 1h 30m DVD
The country of Iga is mired in war, with villages capitulating one by one to ruthless cadres controlled by several large families. Villainous Sankai of Minamiyama seeks to control the area and rein in the renegade warrior Kagerou. On the run from their pursuers, Kagerou and his comrade Aoi decide it's time -- once and for all -- to escape the clutches of the deadly Shinobi clan, whose strict hierarchy they've rejected. Kenji Tanigaki directs.