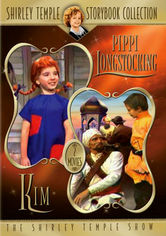 1958 NR 5h 30m DVD
America's tiniest sweetheart, Shirley Temple, eventually grew up to star in her own 1960s television show that retold classic children's tales for viewers of all ages. In "Pippi Longstocking," Astrid Lindgren's pigtailed heroine makes mischief with her new friends Tommy and Annika. In "Kim," which is based on a story by Rudyard Kipling, a young boy working as a spy in colonial India hoists the fate of the British empire on his shoulders.