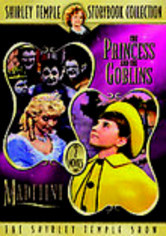 1961 NR 1h 50m DVD
America's tiniest sweetheart, Shirley Temple, eventually grew up to star in her own 1960s television show that retold classic children's tales for viewers of all ages. In "The Princess and the Goblins," a princess finds a set of stairs that leads to a dangerous world where monsters and goblins roam freely. In "Madeline," Ludwig Bemelmans's mischief-making Parisian orphan gets herself into a crop of troubles.