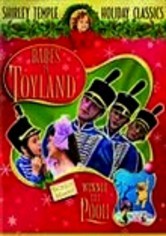 1961 NR 1h 50m DVD
America's tiniest sweetheart, Shirley Temple, eventually grew up to star in her own 1960s television show that retold classic children's tales for viewers of all ages. In "Winnie the Pooh," based on the classic tales by A.A. Milne, marionettes and music bring Pooh and his friends to life. In "Babes in Toyland," a young boy and girl escape the clutches of their evil uncle and embark on a quest to a magical land of toys.