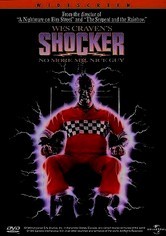 1989 R 1h 50m DVD
Frightmeister Wes Craven (A Nightmare on Elm Street) creates a new boogieman in Horace Pinker (Mitch Pileggi). All the electric chair does to Horace is turn him into a high-voltage phantom that haunts Jonathan (future director Peter Berg), the boyfriend of the girl he gruesomely murdered (there's also a psychic link between the two). Michael Murphy and Heather Langenkamp (of the original Nightmare on Elm Street) co-star.