Shockheaded Peter and Other Songs from the Tiger Lillies 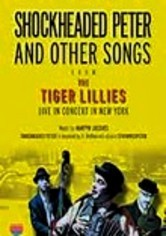 Shockheaded Peter and Other Songs from the Tiger Lillies

2006 NR 0h 47m DVD
The multifaceted Tiger Lillies deliver their unusual blend of punk rock, Bavarian folk and Berlin cabaret music in this memorable live concert filmed at the P.S. 122 theater in New York City. Tracks from the boundary-pushing show include "Shockheaded Peter," "Snip Snip," "The Dreadful Story of Harriet and the Matches," "Beat Me," "Start a Fire," "Soho Boy," "Bully Boys," "Flying Robert," "The Story of Cruel Frederick" and "Alone with the Moon."