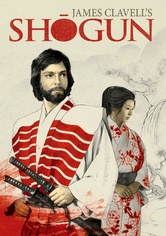 1980 NR 4 discs
Full of action and drama, this critically acclaimed TV miniseries follows the adventures of the English navigator Blackthorne (Richard Chamberlain), who survives a devastating shipwreck that lands him in the middle of a political power struggle in feudal Japan. Blackthorne observes as the aspiring Shogun, Lord Toranaga (Toshirô Mifune), and the Emperor war over the title in this Emmy-winning adaptation of James Clavell's best-selling novel.