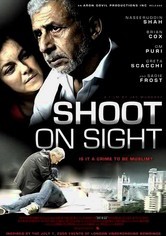 2007 R 1h 52m DVD
To defuse public outrage at the shooting of a Muslim man suspected of terrorism, Scotland Yard assigns Muslim police commander Tariq Ali (Naseeruddin Shah) to investigate. As Ali works the case, several of his jealous colleagues conspire to ruin his reputation. Distrusted by his superiors as well as by other Muslims, Ali can only find true support from his Christian wife, Susan (Greta Scacchi), and their two children. Brian Cox and Om Puri co-star.