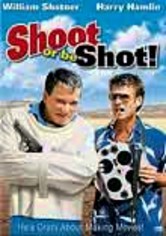 2002 PG-13 1h 30m DVD
After mental patient and wanna-be screenwriter Harvey (William Shatner) escapes from the institution he calls home, he forcibly takes over a film shoot he stumbles upon. The hapless director (Scott Rinker), sleazy producer (Harry Hamlin) and cast and crew are at his mercy as they film an improvised script of Harvey's making, one he's concocting on the spot. Will the end product be a nightmare … or the masterpiece Harvey envisions?