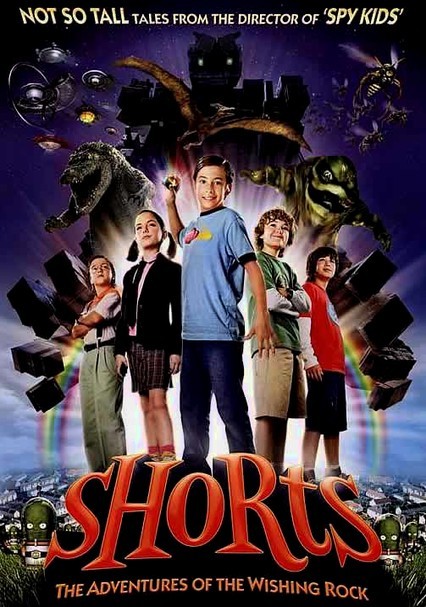 2009 PG 1h 29m Blu-ray / DVD
Chaos erupts when the residents of a tight-knit community learn that 11-year-old Toe Thompson has discovered a mysterious multicolored rock that grants the wishes of whoever possesses it.

Parents need to know that this fantasy adventure from Spy Kids director Robert Rodriguez is sure to appeal to kids and tweens. Expect some mild insults -- like "lunkhead" and "this sucks" -- and potty humor, mostly regarding a booger (one entire vignette is devoted to the topic). The violence is generally humorous and fantasy based; most is directly related to characters' wishes (people transforming into animals, the above-mentioned booger becoming a giant menace, etc.). On a more serious note, the movie has several thought-provoking messages about bullying, family relationships, and technology.

Toby jokes that Helvetica picks on him because she actually likes him; they have a middle-school love/hate relationship. Toby's parents lament their loss of intimacy, and, after a rock literally binds them at the hip, they nearly kiss and eventually fix their relationship. Loogie misguidedly flirts with Toby's older sister, who's in a fight with her boyfriend (they eventually make up with a hug).

Cartoonish and fantastical violence includes a booger turning into a giant monster that chases a group of scared people; a person becoming a weaponized, Transformers-like being that wreaks havoc on a town; a kid's "wish" of rattlesnakes and crocodiles coming true (and then attacking him and his brothers); and the like. More realistic incidents include Helvetica's ongoing bullying of Toby, which usually consists of a daily trip, headfirst, into the nearest trash can; kids falling out of a tree; and kids falling out of a window and breaking both arms.

Fairly frequent use of colorful insults like "lunkhead," "hillbilly teeth," "Dr. Dumb Butt," as well as more traditional ones like "you suck," "freak," and "loser." Kids' nicknames can be mean-spirited, such as "Toe" for Toby, "Hell" for Helvetica, and "Nose" for a boy who eats his boogers.

Teamwork and overcoming obstacles (usually in the form of the Black family) are key messages, as is the basic idea that you have to be careful what you wish for -- because you never know if you just might get it. There's also a strong message about family life. Many sibling and parent-child relationships are strengthened over the course of the adventure. Toby makes new friends and rediscovers old ones who all work together.

The candy bar Nutrageous is shown many times as part of a running joke (a boy wishes he had an endless supply), and Skittles and IKEA are both mentioned.

Glimpses of adults drinking wine/champagne at a fancy costume party in one scene.