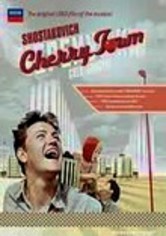 1963 NR 1h 27m DVD
To the four couples at the center of this screen adaptation of Dmitri Shostakovich's comic operetta, the post-World War II housing block of Cheryomushki (Cherry Town) represents paradise -- a much wished-for escape from their cramped flats of old. Laughter and song permeate this cheery musical about life behind the Iron Curtain. Gerbert Rappaport directs, and Vladimir Vasilyev and Olga Zabotkina star.