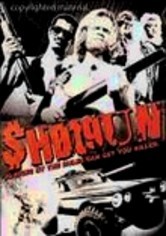 1989 NR 1h 25m DVD
When his sweet but streetwalking sister turns up brutally murdered, grieving Los Angeles police officer Ian "Shotgun" Jones (Stuart Chapin) sets out to avenge her death but gets himself kicked off the force in the process. Now, venturing out on his own, he follows clues across the border to a small town in Mexico, where he winds up wading through a swamp of drugs, money and tough guys to find the killer.