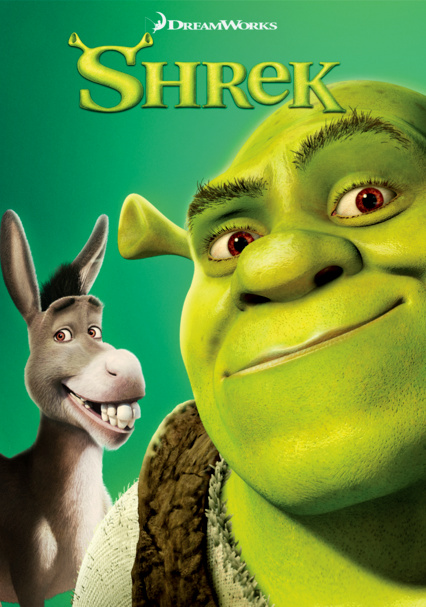 2001 PG 1h 35m DVD
It ain't easy bein' green -- especially if you're a likable (albeit smelly) ogre named Shrek (Mike Myers). On a mission to retrieve a gorgeous princess (Cameron Diaz) from the clutches of a fire-breathing dragon, Shrek teams up with an unlikely compatriot -- a wisecracking donkey (Eddie Murphy). This is the widescreen version of the film and includes a commentary, technical goofs, a storyboard pitch of deleted scenes and more.

Parents need to know that this movie includes some edgy humor directed at teens and adults. The jokes that teens and adults snicker at (like when Shrek wonders whether the small Lord Farquaad is compensating for something with his very tall castle) will be over the head of most younger kids, but parents should be ready for some questions. There's also plenty of potty humor and gross-out jokes directed at kids ¿ mostly based on the appalling personal habits of ogres. Scary scenes for young ones include fights with guards, villagers coming after Shrek with pitchforks, and a fire-breathing dragon (who turns nice when she falls for Donkey). A bird explodes, and its eggs are eaten, and a character is eaten in one gulp by the dragon, but it's not graphic.

Mild sexual humor. Some innuendo that will go over kids' head (for example, when Shrek sees the big tower that is Farquaad's castle and says to Donkey, "Gee, think he's compensating for something?").

Characters in peril; ogre hunters wave pitchforks and torches; a bird explodes; scary fire-breathing dragon (who is much less scary when she gets a crush on Donkey); one character is eaten in one gulp by the dragon.

Strong language for a kids' movie, including "damn," "ass," and "crap."

Staying true to yourself, looking beyond appearances, and the power of friendship are big themes. (But there's also a fair bit of bodily function humor.)