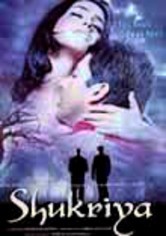 2004 NR 2h 0m DVD
Just four days before the dedication of a cancer hospital in memory of his late mother, successful businessman Jindal (Anupam Kher) is visited by the angel of death, who happens to be named Ricky (Aftab Shivdasani). Ricky tells Jindal that he has just four days left to live, throwing the poor man into a state of shock. As if Jindal didn't have enough problems, Ricky also begins to fall in love with Jindal's daughter (Shriya Saran).