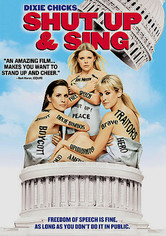 2006 R 1h 33m DVD
Directed by Barbara Kopple (of Harlan County, U.S.A. fame), this documentary centers on country music's The Dixie Chicks and their nationwide vilification over critical statements they made about President Bush in 2003. Over a three-year period, the singers went from darlings of the industry to political targets, receiving constant death threats and being demonized by the national media and denounced by their fans. Cecilia Peck co-directs.

Parents need to know that most teens probably won't be all that interested in this politically charged documentary, which is too bad, since it deals intelligently with mature themes like the debates over free speech and patriotism. That said, it also features repeated uses of "f--k" and other language (someone calls President Bush a "dumb f--k"). The Dixie Chicks face a death threat in Texas, as well as ugly language in protests (on the radio, in on-camera interviews, and spelled out on signs and T-shirts). The women appear in towels as they prepare for a photo shoot in which they pose naked (nothing graphic is shown) except for the words written on their bodies. Overall, the film offers a very sympathetic look at the Chicks, who are by turns funny, passionate, and determined to say what they mean, even when they're told to shut up. Some viewers might see this sympathy as political -- with a liberal slant.

Footage is shown from a photo shoot for the Chicks' Entertainment Weekly cover, for which they appeared naked with controversial words painted on their bodies, indicating their sense of being censored by former fans and conservative radio hosts/callers.

Death threats against the Chicks, including a specific date when Maines is threatened with being shot; film shows increased security provisions and the women's conversations about their fears.

The Dixie Chicks demonstrate that they're dedicated friends/sisters, wives, and mothers; they stand up for their right to free speech, even as music icons; some protesters are rude, and Maines responds with humor, anger, and foul language.

The movie's thematic focus is on the band as a "brand," and on the commercial consequences of their changed status (e.g., Lipton tea wants to pull out of sponsoring their tour); images of and allusions to NPR, CNN, CBS, Guardian newspaper, Lipton tea, Heineken, Burberry, Superbowl, Shepherd's Bush Stadium, Entertainment Weekly, Us Weekly, Starbucks, VH-1, Sony.