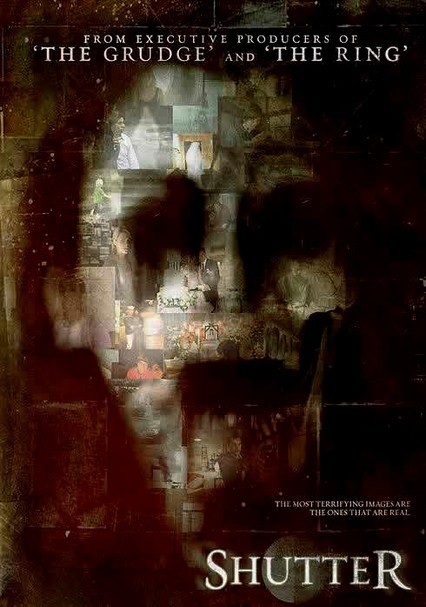 2008 UR 1h 29m Blu-ray / DVD
This American remake of a Thai horror blockbuster follows a young newlywed couple who becomes haunted by strange, shadowlike images in the photographs they develop after their involvement in a car accident. As more terrifying supernatural occurrences befall them, they begin to wonder whether the photographic ghosts are connected to the accident -- and to question whether they can survive learning the truth.

Parents need to know that this horror movie includes some graphic violence, including the bloody effects of a ghost's assaults on victims. There's also a jarring car accident; a leap from a balcony that has a hard, bloody ending on the sidewalk; and a camera eyepiece that pierces a character's eye. The ghost appears repeatedly in shadows and scares people. A sexual assault appears in photos and a flashback scene. The movie also includes some sexual imagery, showing women in bras and panties, as well as naked backs. There's some language and drinking, and a scene shows men agreeing to put a date-rape drug in a woman's wine.

Newlyweds kiss and embrace passionately, then the wife suggests they "get this thing consummated," though nothing is shown. Some bra-and-panties shots of women -- one straddling a man, another posing for pictures. Ghost climbs into bed with Ben and pulls her dress over her head, showing her back, which is decomposed and gross.

Car accident early in the film shows victim slammed by vehicle and tumbling under the wheels, and the car screeching and crashing into a tree. Repeated tense scenes in dark hallways or rooms; several jump scenes in which a ghost, shadow, or person appears unexpectedly. In the darkroom, Ben splashes a chemical on his face and hallucinates blood all over his eyes and face. A camera eyepiece explodes into a photographer's eye, leaving him dead (bloody face in close-up). A man leaps from a balcony with a thud (close-up of a bloody head/eye). Ghost sticks ugly long tongue in Ben's mouth; he gags and coughs and appears to suffocate. Photos show sexual assault on a woman. Man electrocutes himself.