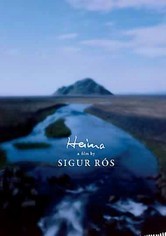 2007 NR 2 discs
In 2006, Icelandic ambient rockers Sigur Rós traversed their homeland to present a series of free concerts at surprising locations across the country. This atmospheric documentary captures the beguiling -- if unusual -- tour. Fans will appreciate the wealth of concert footage in which the band draws upon their entire catalog to perform such classic beauties as "Staralfur" and "Agaetis Byrjun" as well as previously unreleased tracks.