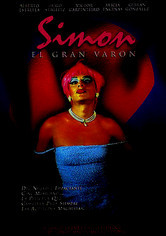 2002 NR 1h 30m DVD
The first-born son of a wealthy Mexican businessman, Simon is doted upon by his father, Don Andres. But as Simon grows older, he displays a fondness for dressing in women's clothing and playing with dolls, and is eventually banished from home and disinherited. He then finds work as a performer in a nightclub that his father patronizes. Not recognizing his son as a beautiful young woman, Don Andres discloses some surprising secrets of his own.