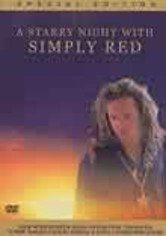 1993 NR 1h 42m DVD
Simply Red wowed audiences during their legendary 1992 world tour, and now fans can relive the magic woven by the soulful Mick Hucknall and the rest of the band. This concert video captures an impressive performance that has the group running through their chart-toppers, including "Jericho," "It's Only Love," "Holding Back the Years," "Money's Too Tight to Mention," "If You Don't Know Me By Now, " "Stars" and more.