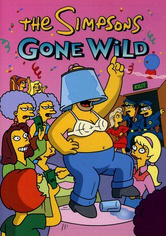 2004 NR 1h 50m DVD
Everyone's favorite animated family, The Simpsons, gets the laughs rolling in these four party-themed episodes. "Homer's Night Out" finds Bart causing mischief with a CIA spy camera, while in "Homer the Moe," Homer stands in for Moe while he's away. In "Sunday Cruddy Sunday," Homer and his friends find out they've been sold fake tickets to a game, and in "The Mansion Family," Homer house-sits for Mr. Burns.