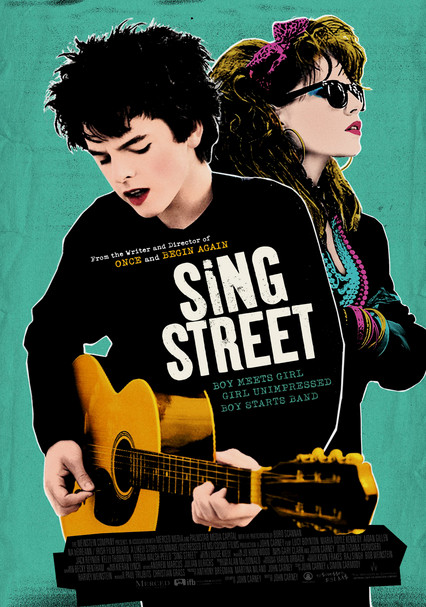 2016 PG-13 1h 46m Blu-ray / DVD
Grappling with a difficult home life, 14-year-old Conor faces more woes when financial problems force his parents to transfer him from a private school to an inner-city public school. Looking for an escape, he forms a band with a group of classmates.

Parents need to know that Sing Street is a winning, thoughtful musical drama from the director of Once that celebrates creativity. There's some edgy content: Characters swear (mainly "s--t," plus a homosexual slur and some other rough words) and smoke (both cigarettes and pot), and there are some disturbing scenes of teen bullying. A marriage falls apart in front of the family's children; there's also some sex talk, and a mom is shown turning on a sex toy. And adults/authority figures aren't always shown in a positive light, but that helps make the movie what it is: a rallying cry to be bold, take chances, and make mistakes on the way to self-expression. It's steeped in music and will likely make adults who watch it with their teens nostalgic for the 1980s -- and motivated to help their kids discover classic acts.

Siblings discuss their mother possibly cheating on their father. Some talk about sex. A mom is shown switching on a sex toy (though not using it), and there's talk of a twentysomething man running off with a 16-year-old girl.

Loud arguments between parents within earshot of their children; a bully at Conor's new school punches him on the first day and tries to get him to do something that makes Conor uncomfortable. Frequent schoolyard fights. A priest/school administrator roughs up a student for wearing makeup and clothing that doesn't conform to the dress code, shoving his face under running water in a sink.

Persevere and follow your dreams, stay true to your own voice, and have fun while you're at it -- even if that means making mistakes and sometimes losing your way.

Brands/products glimpsed/mentioned include a VW Cabriolet car and MTV.

A 15-year-old boy's older brother smokes weed and cigarettes in front of him.