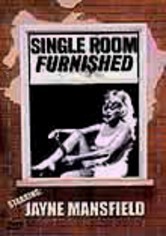 1968 PG 1h 33m DVD
This drama directed by Matt Cimber was Jayne Mansfield's final movie; the sultry actress died during its filming. In her last turn, Mansfield taps into the soul of a woman struggling to find hope in a terrible world. Impregnated as a teenager and abandoned by her husband, she tries to support herself first by waiting tables and, later, by selling her body. The video includes a moving homage to the Hollywood legend by columnist Walter Winchell.