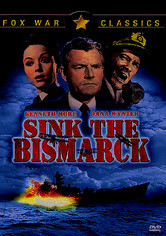 1960 NR 1h 37m DVD
Kenneth More, Dana Wynter and Carl Mohner star in this 1960 drama about the heroic efforts of the British Royal Intelligence to stop the Bismarck, a German battleship launched in 1941 to cut off supplies to Great Britain and invade the country. Director Lewis Gilbert combines actual war footage and a roller-coaster plot to deliver an unforgettable document of world history.