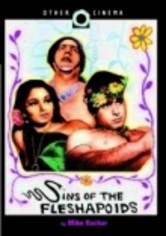 1965 NR 1h 37m DVD
A rebellious robot (Bob Cowan) breaks free from his enslavement in this 1960s classic from underground filmmakers Mike and George Kuchar, the godfathers of bargain-basement cinema. The postapocalyptic tale centers on an android who goes berserk and winds up joining his human masters as they indulge in carnal delights. Also includes two additional Kuchar cult gems: The Secret of Wendel Samson and The Craven Sluck.