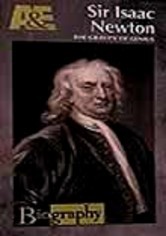 2004 NR 0h 50m DVD
Isaac Newton has been called the Father of Modern Science, with a body of work that represents perhaps the greatest contribution to science ever made by one man. But despite living at the center of an inspired social scene, Newton's personal life was marked by loneliness. This documentary examines the discoveries and fears of this remarkable man. Leading scientists trace the impact of Newton's discoveries as well as his ever-present self-doubt.