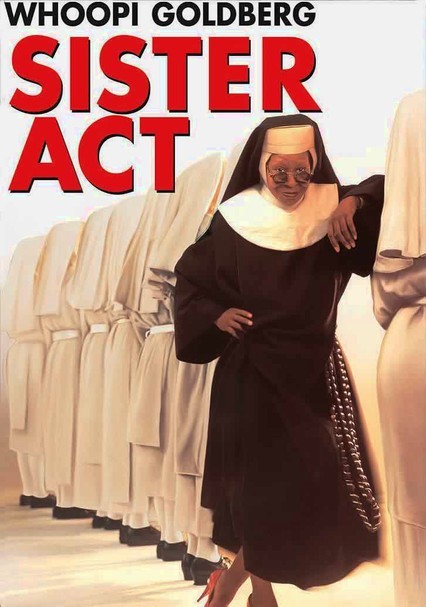 1992 PG 1h 41m DVD
Nightclub singer Deloris Van Cartier witnesses a mob hit and hides out in a convent, where she's disguised (and tries to fit in) as a nun. She finds her calling when she introduces the sisters to doo-wop and turns the choir into fundraising stars.

Parents need to know that while most of this movie takes place in a cloistered Catholic convent, the story begins with a murder committed off-screen by the main character's boyfriend, a stereotypical Italian-American mafia character. When the main character, a lounge singer with a shady past only alluded to, is sent to a convent to hide, she doesn't respect the rules (the movie's tagline: "No booze! No sex! No drugs! No way!"), makes a number of jokey references to what she's forced to live without, and sneaks out to a biker bar. While she rebels against her holy surroundings, she also uses her talents to spiff up the choir and the community.

Some kissing and mild mentions of sex.

Story begins with a real, though not graphic, gangster-style murder.

Low-level cursing such as "damn."

While you'd expect Whoopi's character to be the one needing to be "saved," she's the one who saves the church and helps the neighborhood by using her talents and bringing out the talents of others.

Some references to alcohol. Whoopi's character, who's reluctantly hiding out in a convent, inspired the movie's tagline: "No booze! No sex! No drugs! No way!"