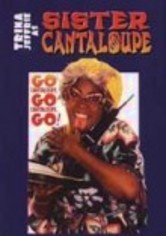 2004 NR 0h 53m DVD
Christian entertainer Trina Jeffrie stars in this musical comedy revue, filmed live in Dallas in 1996, in which she portrays Sister Canteloupe, a nosy yet earnest gossip with a strong personality. Jeffrie utilizes outrageous scripted humor, brilliant physical comedy, and both gospel and popular music to entertain audiences, while maintaining a clear spiritual and religious tone that's appropriate for all ages.