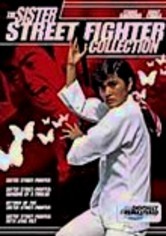 1976 NR 1h 26m DVD
Etsuko Shihomi reprises her role as a female karate master in this 1976 follow-up to Sister Street Fighter (1974), which found her character in Hong Kong on a mission to locate her missing brother. In Sister Street Fighter: Fifth Level Fist (aka Sister Street Fighter 4), Shihomi uses her dazzling martial arts skills to infiltrate a dangerous drug syndicate and take down their operation. Emi Hayakawa also stars.