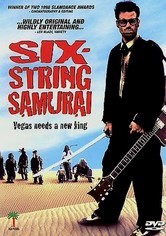 1998 PG-13 1h 31m DVD
After the Russians lob an atomic bomb at the United States in the late 1950s, survivors flock to the neon lights of "Lost Vegas," where Elvis Presley is a bona fide king of music and men, but when His Majesty dies unexpectedly, the city's shiny throne is up for grabs. Armed with a six-string in one hand and a samurai sword in the other, rock 'n' roll hipster Buddy (Jeffrey Falcon) vows to make it to Sin City in time for his coronation.