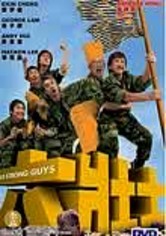 2004 NR 1h 47m DVD
When financial worries, stress and misery overwhelm six middle-aged men, they make a pact to kill themselves. But their suicidal intentions are delayed after several unexpected events force them to give life another chance. Fate leads the men down a hilarious path of hardship to repositories of strength they didn't know they possessed in this male angst comedy directed by Barbara Wong. George Lam and Ekin Cheng lead the ensemble cast.