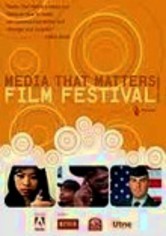 2006 NR 1h 26m DVD
This video gathers a collection of hot-topic short films from the Sixth Annual Media That Matters Festival, which strives to inform and inspire audiences to become active in the issues that plague our communities. Attempting to expose problems such as global warming and prejudice against race, religion and sexual orientation, independent filmmakers may use this artistic open platform to visually compel viewers in eight minutes or less.