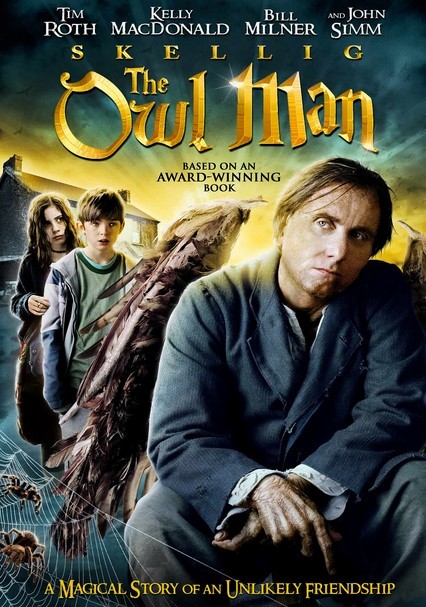 Parents need to know that Skellig: The Owl Man is a 2009 made-for-TV adaptation of David Almond's award-winning novel. There are some emotionally intense hospital scenes, and the film freely discusses death, dying, and miscarriages within families. Scenes with cockroaches and scenes where the titular character eats live snails could be difficult for more sensitive viewers, or those watching during a meal. A coach is shown belittling a boy because he is afraid of heights and unable to climb up the high dive to jump into a swimming pool. Aside from this, there is some minor taunting between tween boys who are friends, and a violent pushing and shoving match between two friends near the film's climax. There is also some language ("s--t," "piss off").

Some tween-boy taunting, as two of Michael's friends accuse him of having a girlfriend when they spy on him spending time with a neighbor girl.

At the beginning of the film, a boy stands at the edge of a cliff with a broken nose and then jumps. A boy finds a hunting rifle and runs around a forest carrying it. Two tween boys push and shove each other; one is shoved violently into a rocky wall. When his father sets a shed on fire that is occupied by a mysterious seemingly homeless man, Michael rescues the man, but visibly burns his hand.

"S--t." "Piss off." Due to a fear of heights, Michael avoids diving off a high dive in gym class; his teacher makes fun of him, as do some other boys in the locker room. Two tween-boy friends of Michael taunt him when they spy on him spending time with a neighbor girl.

This film promotes the importance of having faith in yourself and in those around you.

Michael steals bottles of beer from his parents' refrigerator in order to take them to Skellig, who greedily swallows from the bottles and declares ale to be the "nectar of the gods." After a difficult day, Michael's father drinks beer to excess. He acts intoxicated, and then decides to burn down the ramshackle shed in the back yard of the property he has just purchased. Later, when he believes that his son is stealing his beer, Michael's father tells Michael, "Alcohol is never the answer."