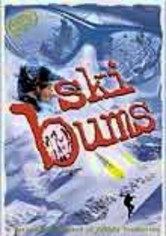 2001 NR 1h 17m DVD
Aiming his lens at a motley crew of extreme skiers and snowboarders -- who go by names such as Red Eye Lisa, Johnny Thrash and Punchy -- Academy Award-winning filmmaker John Zaritsky captures the fascinating subculture of a wealthy ski resort in Whistler, British Columbia. The jaw-dropping footage plays well against an adrenaline-fueled soundtrack with music by Tom Cochrane, the Super Friendz and See Spot Run.